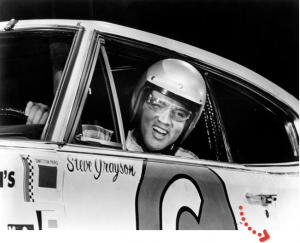 Elvis’s stepbrother, Rick Stanley, remembers the story thusly: There was a member of Elvis’s entourage who had no particular duties and was frequently dispatched to get the King hamburgers, for which he earned the moniker “Hamburger James.” One morning, Elvis became convinced someone had stolen money and intimate pictures of him and Priscilla, and the only member of his crew missing was Hamburger James.

In a moment of inspiration, one of the crew suggest Hamburger James had gone to the airport. Elvis and his guys took off, and learned a plane was soon departing for Memphis. Surely the dastardly James was on that plane.

Elvis rushed into the airport brandishing one of his various police badges and demanded the gate attendant stop the taxiing plane from taking off. Against all odds and reason, the plane complied. Elvis’s gun-toting bodyguards boarded it and found, sure enough, the villainous Hamburger James, who was unceremoniously dragged from the plane. Then Elvis slapped the crap out of James.

“Elvis reaches over while Hamburger James is looking straight at him, scared to death, and slaps him twice. Like in the movies, A slap, and then a backhand. Pow! Then pow! again. Then the most amazing thing happened. Hamburger James got a funny look on his face and wilted like a baby. He cried and cried. Like his heart was broken. He said he was sorry he stole, and he would give it all back, and he knew that he had done something that he couldn’t ever be forgiven for.”