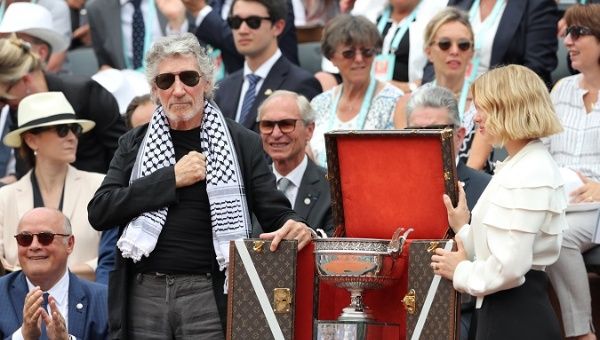 A long-time supporter of the Palestinian cause, Roger Waters misses no opportunity.
The British Musician and activist Roger Waters wore a Palestinian Keffiyeh when presenting the men’s category Coupe des Mousquetaires of the Tennis French Open in which Spanish tennis star Rafael Nadal won the title this year for the 11th time.

Waters presented the trophy along with actress Lea Seydoux prior to a match between the Austrian Dominic Thiem and the Spanish Rafael Nadal at Roland Garros in Paris, France, on Sunday.

The former Pink Floyd member joined the pro-Palestinian Boycott, Divestment and Sanctions, BDS, movement in 2011 but he had supported it for years before, when Palestinian advocates of the boycott convinced him to visit the separation wall to reconsider his planned 2006 concert in Tel Aviv.

His act of solidarity at the popular international sport event came just days after he took some time ahead of a concert in Berlin to defend the BDS movement and highlight the plight of Palestinians in Gaza after the recent extrajudicial killings perpetrated by Israeli forces on the border between Gaza and Israel during this year’s Great March for Return protests, in which more than 100 demonstrators were killed by sniper fire.

Endorsing the movement, Waters penned an opinion piece published by The Guardian in 2011 saying: “In 1980, a song I wrote, Another Brick in the Wall Part 2, was banned by the government of South Africa because it was being used by black South African children to advocate their right to equal education.”

He added: “Twenty-five years later, in 2005, Palestinian children participating in a West Bank festival used the song to protest against Israel’s wall around the West Bank. They sang: ‘We don’t need no occupation! We don’t need no racist wall!’,” he continued.