Wild man Elvis Presley, King of Rock and Roll—and also, apparently, King of Foreplay—never seemed like the kind of kid who would go on to become a rock and roll sex monster. In 1954, he was a truck driver making $1 an hour, an awkward kid who’d once been too shy to sing on the radio, and whom a contemporary told to stick to truck driving because he was never going to make it as a singer. But the Eisenhower years were a time of opportunity for everyone – two years later he was getting paid more than any performer in history, drawling and gyrating so suggestively the establishment viewed him as an uncontrollable, dangerous maniac. And he kind of was, although in ways nobody foresaw at the time, as you’ll see from these crazy Elvis Presley facts.

Among these insane Elvis stories are episodes featuring a chimpanzee who serially assaulted women, firearms both real and imagined, and numerous counts of impersonating a police officer. There is a ludicrous amount of drugs. And, of course, there is sex—lurid sex that occupies a very particular place somewhere in between scandalous, horrible, and downright weird. Get ready for drinking and drugging with Elvis, kids.

He Dated Girls As Young As 14 Throughout His Life 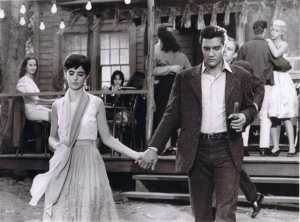 Elvis had a parade of encounters with teenage girls throughout his life, all the way up shortly before his death, when he was dating 14-year-old Reeca Smith. This was nothing new; immediately before meeting future wife, 14-year-old Priscilla, The King dated Jackie Rowland, also 14.

Biographer Alanna Nash suggests the death of Elvis’s mother so devastated him he never became comfortable around women his own age, instead preferring girls so young they were unthreatening—girls who were virginal, nurturing, or whom he could see in any context other than overtly sexual. Reeca Smith, at least, insists Elvis was very respectful, saying “He didn’t take advantage of me.”