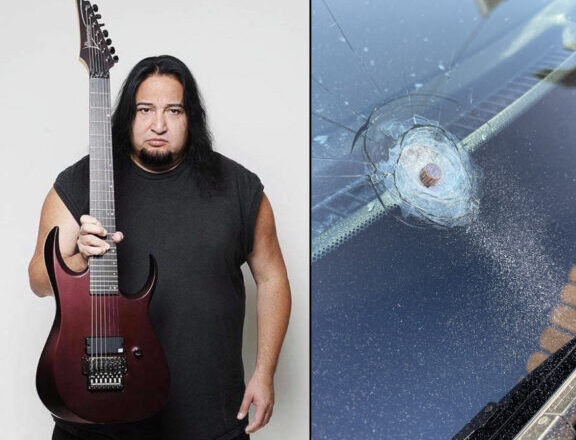 The 54-year-old musician, who lives in Los Angeles, took advantage of his Twitter this afternoon to share a photo of the windshield of his car, with the bullet still stuck in the glass.

He wrote in an attached message: “Today, a bullet hole in my windshield, the Los Angeles Police Department asked me if I had any enemies, I said ‘yes’ and named 3 people. Let’s see where this investigation is going. Caliber, it’s a big bullet. ”

When a Twitter user commented that it is “interesting” that the bullet “did not go through completely,” Cazares replied: “The metal bar that is part of the frame that supports the front dash prevented it from going completely.

Last weekend, Dino revealed in an interview that Fear Factory‘s new album will arrive in the next “two to three months.” A single will precede the full-length effort “soon”.

In September, singer Burton C. Bell issued a statement officially announcing his departure from Fear Factory, saying that he “cannot align himself” with someone he does not trust or respect.

Bell’s departure from Fear Factory came more than two weeks after Cazares launched a GoFundMe campaign to help him with the production costs associated with the release of FEAR FACTORY’s long-awaited new album.

Bell then told Kerrang! magazine that his separation from Fear Factory was a long time coming. “It’s been on my mind for a while. These lawsuits [over the rights to the Fear Factory name] just wore me out. The egos. The greed. Not just from the band members, but from the lawyers involved. I just lost my love for that.

Pressed on whether there is any chance of reconciliation with Fear Factory in the future, Burton said: “I’m done. I haven’t spoken to Dino in three years. I haven’t spoken to Raymond [Herrera, drums] and Christian [Olde Wolbers, bass] longer than that, and I don’t intend to. I’m just moving on with my life. ”

In October, Dino issued a statement in which he said the door for Burton to return to Fear Factory would not “stay open forever.” The guitarist also revealed that Burton “lost his legal rights” to the Fear Factory name “after a long legal battle” with Herrera and Olde Wolbers. “I had a chance to do something right, and I felt that getting the full name was the right thing to do for both of us, so after almost four years we can continue as FEAR FACTORY, make more records and tour,” he said. “So it’s sad to hear that he decided to quit and, in my opinion, whatever problems he has, it seems like it could have been resolved.”

Explaining his reasons for starting a fundraising campaign, Cazares said that all donations will go toward covering recently incurred production costs related to making Fear Factorys new LP, including re-recording drums, guitars, bass and keyboards mixing and mastering by Andy Sneap. Burton’s original lead voice, which was recorded in its entirety in 2017, will remain on the new version of the album.

The Fear Factory fundraising campaign marked the band’s first public activity since they completed a headlining tour of the United States in 2016 in which they performed their second classic album, “Demanufacture,” in its entirety.

Bullet hole in my windshield today, Los Angles Police Department asked me if I have any enemy’s I said “yes” and named 3 people. Let’s see where this investigation goes. LAPD said it looks like a 45 caliber, it’s a big bullet. pic.twitter.com/VArPo8i9XV

The metal bar that’s part of the frame that holds the front dash stopped it from going all the way through https://t.co/GlGF649hex

The bar that’s part of the frame that holds the dashon the inside stopped it from going all the way through https://t.co/GlGF649hex