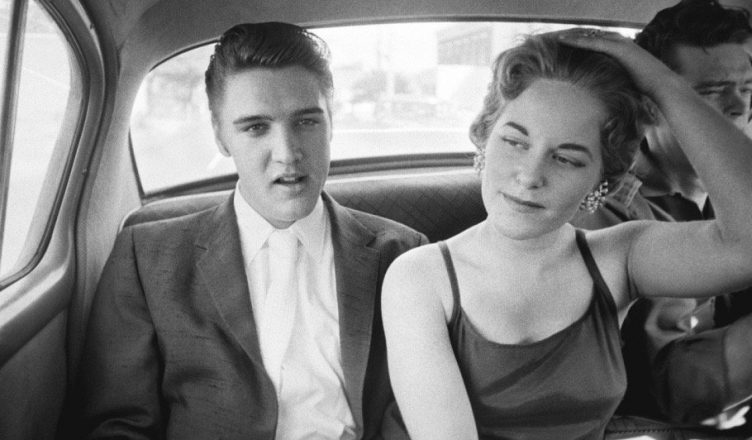 Women fell over themselves to get with Elvis. Here are a few woman who got lucky and made it with the King.

Early girlfriend Dixie Locke, went to the prom with Elvis. They dated for a long time and even talked about marriage. She liked him because, most boys are like thier dads, but Elvis was different. The first time her family met him, her Uncle offered him 2 dollars to get him a hair cut.

June Juanico first met Elvis in June 1955, after he saw her in the crowd at one of his concerts. They had an incredibly, innocent 1950’s relationship. On one occasion when they got close to having full blown sex, they were ‘saved’ by his Mom, Gladys. While Elvis was dating girls in Hollywood, June met a local man and got engaged. In March, 1957, Elvis asked June to meet him at Union Station in New Orleans, where he had to change trains. He told her he had something to show her and she needed to go with him. She told him she couldnt, but she loved him and now she was getting married. Elvis cried as she walked away and the next day, June read: ELVIS BUYS GLACELAND.

Elvis dated Natalie Wood, whom hang out with James Dean. She liked the non-drinking, non-smoking Elvis refreshing. She called him the high school boy she never dated.

Anita Wood was a Memphis DJ and the hostess of TV’s Top Ten Dance Party, when she met Elvis. They were pretty serious for a long time and she wrote him alot of letters while he was in the army ( Priscilla wasnt happy!) She also recorded a song on the Sun Record Label called I’ll Wait Forever. She was going to have to.

Debra Paget was Elvis’s co-star in Love Me Tender and accounts vary as to whether or not they dated. She dug her nails in years later by saying he was too much backwards, if you know what I mean.

Dolores Hart was Elvis’s co-star in Loving you and King Creole. Her called her ‘ Hot Lips’ after acting a kissing scene in hot New Orleans. She said he was charming but unrefined, like a young animal. Shortlly afterwards, Dolores entered a convent!

Within days of arriving in Germany, Elvis began to date a local girl called Margit Buergin, whom he met in a park. She had been placed there by a photographer who hoped Elvis would fancy her because she looked like Brigitte Bardot. In a letter to his friend Alan Fortas, Elvis described his relationship with Margit as ‘ Grind City’.

Elisabeth Stefaniak was a young fan who met Elvis at the cinema and became his live in secretary at Bad Nauheim. She fell in love with him and often shared his bed, but not, to her regret, exclusively.

On army leave in Paris, Elvis stayed in at The Hotel Prince of De Galles on Avenue George V. A waiter described the girls going in and out of Monsieur Presley suite like a revolving door. One night the manager of the Lido nightclub had to phone Elvis to ask for the girls to head back to the club to start the show. You see, the whole entire chorus line were in Elvis’s hotel room!!!!!

Barbara Leigh, who was best known for her cult role in Vampirella, dated Elvis for 2 years – while she also dated Steve McQueen!

Ann Margret was Elvis’s co-star in Viva Las Vegas. She was nicknamed the female Elvis Presley by the press. They fell in love and had a red hot affair Elvis’s friends thought she was great for him and Elvis loved her because she wasnt smitten by his fame. Elvis would always go over to her house, with never happened with Elvis before. The woman would always go to see Elvis. Ann made the mistake of talking about their affiar and so Elvis dumped her. They remained great friends til the day he died.

When they met Elvis, The Beatles – YES THE BEATLES – Were astounded at the number of woman around him. Shame John Lennon was drooling over Priscilla too much or Elvis would have liked him!

Elvis had alot of paternity suits filed against him, the first in 1959, from a girl in Ohio. None of them ever won!

Elvis briefly dated the actress Joan Blackmen. He wooded her by driving up to her on the Paramount lot and yelled ‘ Hey, you, c’mere!’. It worked!

Elvis and Nancy Sinatra were almost lovers, but never quite. They starried together in Speedway and made out in his trailers, but the one time he kissed her – He pulled away quickly and apologised. She later she of their small kiss ‘ I thought I was going to die’. I dont blame her!

Elvis had a relationship with Kathy Westmoreland, the soprano he always introduced on stage as ‘ The little girl with the beautiful high voice’. He read to her and recited poetry. One day she told him she was still a virgin and couldnt understand why this was a big deal. Elvis told her he was proud of her for holding on for that for a long time. Kathy only held out for a hours after that!!

Elvis dated fellow Memphian Cybill Shepherd for a short while. They met in the cinema and she smelled him before she saw him. He wasnt wearing strong perfume, it was just the aura of Elvis walking into the room. The affair is best remebered for her revelation that burgers wasnt the only thing Elvis loved to eat!

Elvis met Linda Thompson in 1972 when he went to the cinema. She had just become Miss Tennessee and completely bowled Elvis over. For a whole year, they were together 24/7 and she lost her virginity to him, but it soon broke down. Linda finally left him in November 1976. She loved and cared for him in his worst times, but without knowning that Elvis only had a few months to live, she just couldnt cope anymore.

Elvis met Ginger Alden in November 1976. She was Miss Mid-South and looked uncannily like Priscilla. They argued alot but Elvis soon asked her to marry him, and although she was too young and had no idea what she was getting herself into, she said yes. It was Ginger who found Elvis’s body on August 16, 1977.