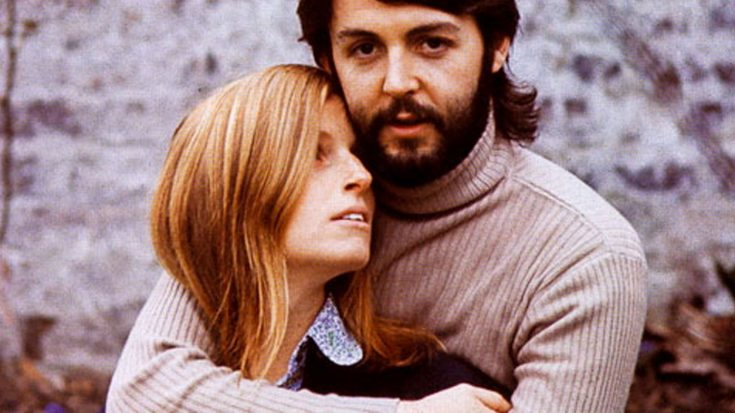 The former Beatle says that the west of the Scottish peninsula was one of his favorite places in the world and the photographs of his time at High Park Farm are part of a new retrospective of Linda McCartney ‘s work, which is displayed in the art gallery Kelvingrove of Glasgow.

Images of Scottish rural life are found next to photos of music legends like Jimi Hendrix and Aretha Franklin, which Linda McCartney took before the couple settled in their new home.

Sir Paul McCartney , now 77 years old, told the Ricky Ross Meets program on BBC Radio Scotland that his late wife was a pioneer photographer before the couple met and formed a family.

In 1968, her portrait of Eric Clapton appeared as the cover of Rolling Stone magazine and was the first photographer to do so.

But after her marriage to Sir Paul McCartney in 1969, her photographs became more intimate and emotional, exploring the natural world and family life.

Many of them were taken near the farm and its 200 acres of land near Campbeltown, which Sir Paul McCartney bought at the height of Beatlemania in 1966, on the advice of financial advisers.

He says he knew little about Scotland, but his Beatle colleague John Lennon had relatives there and they would “talk about it very fondly.”

“I think my attraction to him came through him when I originally talked about that,” he says.

“When I met Linda McCartney and we were becoming a couple, she said ‘do not you have a place in Scotland?'”.

“We went up and she fell in love with her completely, I loved the wild and I loved horse riding and animals in general.”

Linda, who was born in the state of New York in 1941, photographed the Manhattan music scene of the 1960s and then met British bands like The Rolling Stones and The Beatles.

Sir Paul McCartney says: “When she came to Britain and we got married, life was more domestic.”

In Kintyre she would photograph “old bidders and bonnie babies in strollers,” she says.

“She always reassured people, she had a way to disarm you.”

Sir Paul McCartney says that the great attraction of getting away from Kintyre was “freedom,” for them and later for their four children, who spent a lot of time roaming the countryside.

The joy of the “fog that comes from the sea” would inspire his 1977 success Mull of Kintyre, which sold two million copies.

He says that Linda’s education had been quite strict and that she wanted to be able to satisfy her passions, like the love of animals, which would later lead her to be a pioneer in the vegetarian movement.

“When she came to Britain and we met, the best part was that we both wanted to be free,” says Sir Paul.

“We did what we wanted and she took pictures of everything.”

The exhibition at Glasgow’s Kelvingrove Museum and Art Gallery runs from Friday through January of next year.

It has been produced by Linda’s daughter, Mary McCartney, who is also a professional photographer, and Sarah Brown, who looks after her file.

In addition to the photographs, the exhibition includes one of Linda’s diaries from the 1960s and its cameras, photographic equipment and periodicals.

Sir Paul  McCartney says that Linda, who died of breast cancer 21 years ago, had exhibitions during her life, but would have loved the idea of ​​a retrospective of all her work.

Sir Paul McCartney’s mother, Mary, died at the age of 47, when he was only 14 years old.

“Both my mother and Linda died of breast cancer,” she says.

“We did not know what my mother had died because nobody talked about it, she just died.

“The worst part of that was that they were all very stoic, everyone had a rigid upper lip and then, one night, you would hear my dad cry in the next room.

“It was tragic because we had never heard him cry, it was a kind of private and silent grief.”

Sir Paul McCartney says that his own grief for Linda McCartney was much more open.

“I think I cried for about a year,” he says.

“You wait to see them enter, this person you love, because you are very used to them.

“I cried a lot, it was almost embarrassing, except that it seemed to be the only thing I could do.”

One thought on “Paul McCartney said: ‘I cried for a year when Linda McCartney died’”