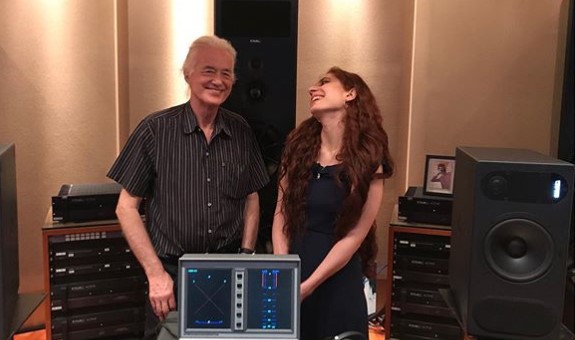 Led Zeppelin legend Jimmy Page looked very happy in a photo that was taken in a studio and shared by his girlfriend Scarlett Sabet on his official Instagram account.

The couple, who are 46 years old, have been together for almost six years. As many fans wonder how they get along with each other despite the years between them.

Sabet has revealed her latest Instagram post and, through interviews, gave how everything is going very well. This is what a famous poet and actress, Scarlett Sabet, said in her latest post in which she shared a photo of Jimmy Page in a studio:

“A year ago today, having recorded Catalyst at home, we went into Metropolis Studios with John Davis to cut Catalyst to vinyl ⚡️⚡️⚡️⚡️❤️”

Scarlett Sabet, in one of the interviews she gave two months ago, revealed that as a couple they have a calm and happy life. She also explained how she sees Page and how intimately they are bonded to each other despite the challenges along their way. She said:

“Jimmy has this dark reputation, and certainly people play up the Casanova image. Obviously, Jimmy has lived, but now he doesn’t drink either, so that’s another thread that binds us. He’s seen people who have died, he’s lost best friends. He’s seen all sides of that coin.

He really is my best friend and the person who makes me laugh the most. It’s funny because on paper there is a massive difference. But when he’s standing in front of me, it’s not something I feel; it’s not something that impedes us.”

A year ago today, having recorded Catalyst at home, we went into @metropolisstudios with @johnkeithdavis1 to cut Catalyst to vinyl ⚡️⚡️⚡️⚡️❤️