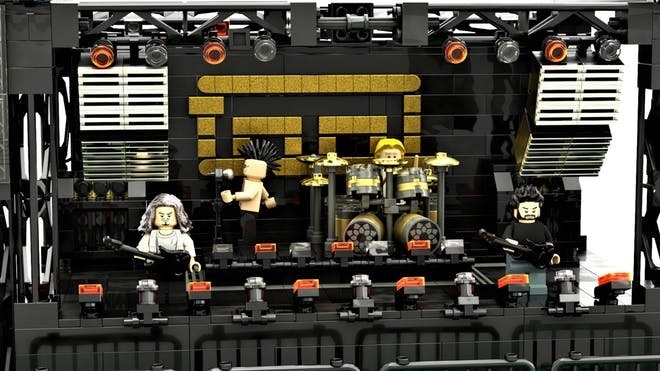 It’s no secret that we all had to wait a long time for the new Tool album, Fear Inoculum. But do you know what could have helped to pass the time during those 13 years? If we had a LEGO set of the band to play.

Through LEGO Ideas, an initiative to “share your great creations and creativity, participate in prize contests, display your proposals for new LEGO Ideas sets and vote for amazing models dreamed by your fellow designers,” a very creative fan has risen a tone for a LEGO Tool set, with a customized stage featuring Danny Carey, Adam Jones, Maynard James Keenan and Justin Chancellor. There is incredible attention to detail when it comes to Danny’s battery in particular.

Read what the creator, blocksandmocs, has to say about it:

“This project is a tribute to the legendary rock band Tool. I was inspired from the recent fulfilment of a long anticipation, 18 years off wait that Tool will release a new album. Tool have accompanied me throughout my life, as a meaningful and integral part in the soundtrack of my life, to this day and on.

“I think a series of a musical stages and artists would appeal to many lego fans. It would be a unique way to connect and show the musical influences you may have, your favourite rock bands, even a good show you watched or wish to visit. Music is a fundamental element of life, it accompanies us In so many different ways. The possibility of integrating music with lego is fantastic! Upgrading the interactive and displayable features of Lego.

“When I published these models on social media it achieved high interest and request to purchase. I was gladly surprised to find out that even among music fans which are not a regular lego buyers the interest was high. I believe that a series of this kind would enlarge lego kits buyer due to versatility and collectable qualities of this sets.”

Catch the real, non-plastic Tool live at the following dates this year: