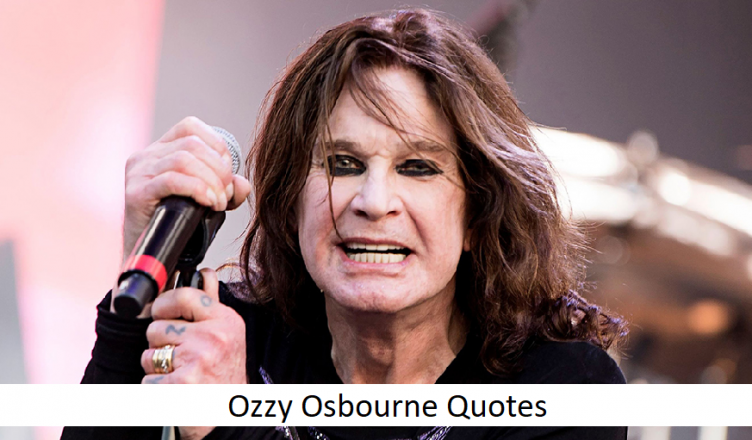 “It had a huge impact on me, ‘Smells Like Teen Spirit’ – and I was very proud when I found out that Kurt Cobain was a fan of mine. I thought he was awesome.”

I keep hearing this [expletive] thing that guns don’t kill people, but people kill people. If that’s the case, why do we give people guns when they go to war? Why not just send the people?

I can honestly say, all the bad things that ever happened to me were directly, directly attributed to drugs and alcohol. I mean, I would never urinate at the Alamo at nine o’clock in the morning dressed in a woman’s evening dress sober.

“I’m a very simple man. You’ve got to have, like, a computer nowadays to turn the TV on and off…and the nightmare continues.”

My father always said I would do something big one day.’I’ve got a feeling about you, John Osbourne,’ he’d tell me, after he’d had a few beers.’You’re either going to do something very special, or you’re going to go to prison.’
And he was right, my old man.
I was in prison before my eighteenth birthday.

“I’ll only retire in the day I should be dead and they have me buried, and some idiot spell over my casket some stupid gospel stuff.”

I was curious, given the swimming pools of booze I’ve guzzled over the years – not to mention all of the cocaine, morphine, sleeping pills, cough syrup, LSD, Rohypnol… there’s really no plausible medical reason why I should still be alive. Maybe my DNA could say why.

“They said I would never write this book.
Well, f**k ’em – ’cos here it is.
All I have to do now is remember something…
Bollocks. I can’t remember anything.”

“The Jesus freaks were the worst. While the ‘Suicide Solution’ case was going through the courts they followed me around everywhere. They would picket my shows with signs that read, ‘The Anti-Christ Is Here’. And they’d always be chanting: ‘Put Satan behind you! Put Jesus
in front of you!’
One time, I made my own sign – a smiley face with the words ‘Have a Nice Day’ – and went out and joined them. They didn’t even notice. Then, just as the gig was about to start, I put down the sign, said, ‘See ya, guys,’and went back to my dressing room.”