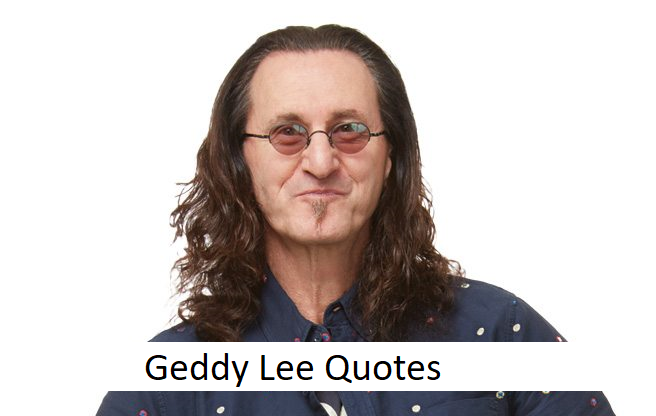 “But, I would be naive not to recognize the number of musicians who tell me they have been influenced by me and sight me – as well as Alex and Neil – as a musician who has been a positive influence on their playing.”

“I like to be able to come and go as I please, and I don’t really like having my face and name plastered around. I think it’s a bit weird to have your name plastered on every page in a magazine, where in each case you’re using a different piece of equipment.”

I think jamming is the way we begin to communicate. In the old days, people actually wrote notes on paper and sent them to each other. I guess that’s how they jammed.

My emotions are very simple and always have been about the Hall of Fame. It’s something that I had absolutely nothing to do with and had no control over, so I never thought much about it, to be frank.
-Geddy Lee Quotes

“I was taking piano lessons with a very good piano instructor in Toronto, and I’m afraid due to my schedule and discipline, it kind of fell apart. One thing lead to another and I was unable to practice as much as I wanted to.”

But, I would be naive not to recognize the number of musicians who tell me they have been influenced by me and sight me – as well as Alex and Neil – as a musician who has been a positive influence on their playing.

“When I usually go to my studio to work, I start with something that is going to take two minutes just to put some idea down and the next thing I know, ten hours have gone by and my family is screaming at me because they want me to come up to have dinner with them.”
-Geddy Lee Quotes

I do love using keyboards and I love writing keyboard parts, but I am not a player in the true sense of the word.

“With the help of modern technology, I can compose intricate keyboard parts and then I have to go back and learn them in order to perform them properly.”

There was a time when fast playing and fretboard pyrotechnics on the bass were important to me and when I am recording a bass track, that is still very important to me.
-Geddy Lee Quotes

I have such an extreme attitude about work, where I can just completely be derelict of my responsibilities and then when I am not derelict, I am completely indulged in it. I swing pretty wildly from the two extremes.