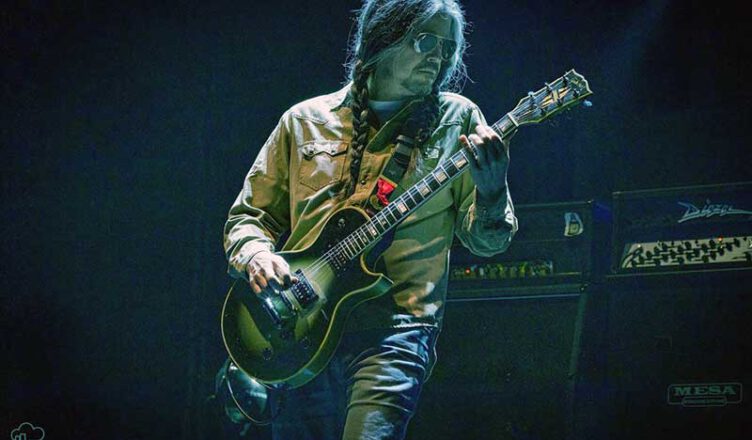 Tool’s iconic guitarist Adam Jones was the recent guest of Guitar World and revealed his best guitarists of all time.

As you will see the Jones list below, Adam Jones put 3 members of King Crimson on the list.

“Fripp’s playing caused me to ‘wake up’ to music when I was younger.”

“People don’t bring up Adrian Belew enough, and I think he’s just as heavy as Fripp. Adrian plays straight from his heart, so some of his lead structures defy the classical approach to scales and teaching.”

“I know Trey Gunn plays the Chapman Stick and the Warr guitar [a seven-to-15-stringed guitar designed for two-handed tapping], but it’s still ‘guitaring’ to me. His left- and right-hand approach is like that of a classical pianist.”

“Buzz’s playing has those same qualities of attitude and discipline that I learned from Fripp. The Melvins’ style is also so brutal. They rip their guts out every time they play.”

“Paul Leary’s playing is completely innovative and breaks every rule in music theory and scales. His leads will go in any direction, but they fit so perfectly.”

“That Gang of Four shit kicked my ass! Andy Gill is a completely underrated guitarist. Back in the ’70s, I was just a kid playing in bands and trying to shake off the massive classic-rock influence that I was under.”

“I’d always liked Bad Brains, but I’d never seen them live until I moved to California.”

“These guys have taken the Swedish metal genre completely off the path and into an extremely innovative area. I hate to single out Fred, but he’s just great. He has an incredible lead style. But both of those guys are fucking amazing.”

“Ronald Jones was this completely innovative guitarist that used to play in the Flaming Lips. He used to play with a quarter for a pick, so he could slide it down the strings. I’ve also never seen a guitarist with so many effect pedals.”