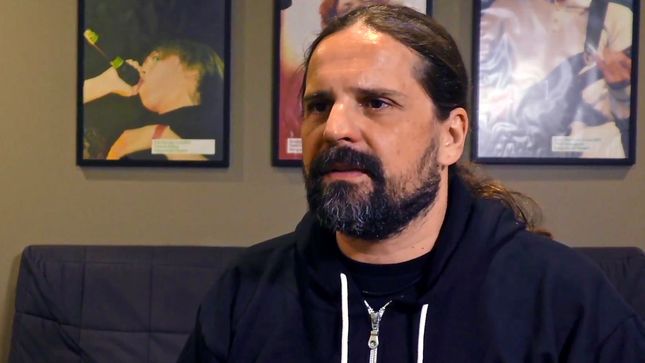 Sepultura guitarist Andreas Kisser says he has more than a dozen songs on demo for a possible second solo album, but that he just doesn’t have time to work on the follow-up to “Hubris I & II.”

A two-disc set, “Hubris I & II” was released in June 2009 through Holland’s Mascot Records and was nominated in the category of “Best Brazilian Rock Album” at the 2010 Latin Grammys.

Speaking to “Talking Bollocks,” the monthly metal podcast hosted by Acid Reign frontman turned comedian Howard H. Smith, Kisser confirmed that he has been gathering ideas for another solo endeavor, but that his busy schedule, which includes activity touring with other projects has prevented him from taking the LP to completion.

“I have no plans, but I have a demo with about 12-15 songs for an upcoming solo album,” he said (listen to the audio below). “All I really need is to have time to work on it and pick the songs and work on things. But so far, there are no plans. But sure, sooner rather than later, I want to start working on it to put out something new. . It would be great “.

Kisser went on to say that he really enjoyed making “Hubris I & II”, which was recorded during a transitional period in Sepultura’s career.

“It took a long time, because it was between changing drums, Igor [Cavalera] was leaving the band, and two albums and stuff, but I managed to get it out,” he said. “I do a lot of acoustics [playing on it]. I sing Portuguese and English, [with] a lot of guests and stuff.”

Kisser previously described the making of “Hubris I & II” as “a long process, a learning process, and a great experience. It is a musical journey through the influences that I had during 15 years of my life and at the same time, it was very different from anything I did [before its release]. ”

Sepultura was formed in Belo Horizonte by the brother’s Max and Igor Cavalera, who are no longer with the band.

“Quadra” is the follow-up to “Machine Messiah,” which was Sepultura’s fourteenth studio album and the eighth since Green joined the ranks.