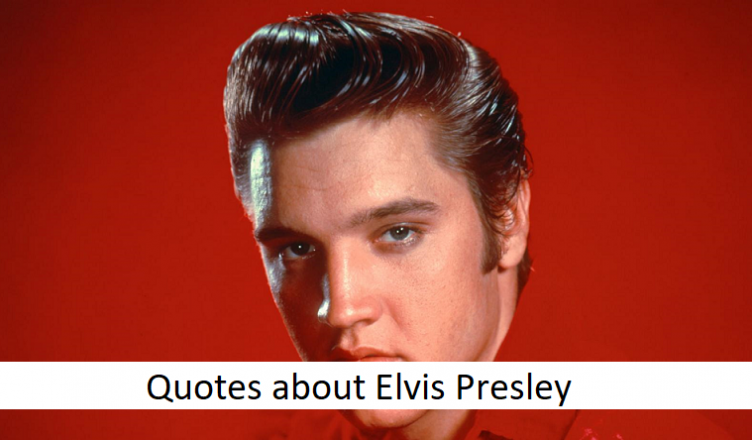 When I first heard Elvis‘ voice I just knew that I wasn’t going to work for anybody; and nobody was going to be my boss. Hearing him for the first time was like busting out of jail.
–Bob Dylan

Ice Cube went straight outta Compton to hearing, ‘Are we there yet?’ Eddie Murphy blew up striding across the stage in a red leather ensemble that would have made Elvis Presley chuckle, yet is probably best known to anyone born in the 21st century as the overly chatty donkey from ‘Shrek.’
– Elvis Mitchell

My own musical ambitions were born when I was five, watching the Ed Sullivan Show on TV. When Elvis Presley burst on to the screen, singing ‘Don’t Be Cruel,’ I felt my first sexual thrill, though I didn’t know what it was at the time.
– Suzi Quatro

“A lot of people have accused Elvis of stealing the black man’s music, when in fact, almost every black solo entertainer copied his stage mannerisms from Elvis.”
– Jackie Wilson

I think Jerry Lee is sad. As a musician, he was far more talented than Elvis Presley. Everybody down in Memphis knows that. Elvis became a movie star because he was beautiful. Not that Elvis wasn’t talented, but Jerry Lee Lewis was incomprehensibly talented as a musician.
– Alec Baldwin

“…At Sun Studio in Memphis Elvis Presley called to life what would soon be known as rock and roll with a voice that bore strains of the Grand Ole Opry and Beale Street, of country and the blues. At that moment, he ensured – instinctively, unknowingly – that pop music would never again be as simple as black and white.”
– David Fricke, “Rolling Stone”

When I was in high school in the ’50s you were supposed to be an Elvis Presley, a James Dean, a Marlon Brando or a Kingston Trio type in a button-down shirt headed for the fraternities at Stanford or Cal.
– Robert Hass

“This boy had everything. He had the looks, the moves, the manager, and the talent. And he didn’t look like Mr. Ed like a lot of the rest of us did. In the way he looked, way he talked, way he acted – he really was different.”
– Carl Perkins

The first record I ever listened to was Elvis Presley, and I remember thinking, ‘Man this guy is cool!’ The swagger he had really helped my confidence, because he really made me think that a white boy could make music like this.
– Jesse McCartney

“Ask anyone. If it hadn’t been for Elvis, I don’t know where popular music would be. He was the one that started it all off, and he was definitely the start of it for me.”
– Elton John

One gets the impression that Elvis Presley does what his business advisors think will be most profitable. My advice to them: Put Elvis Presley in the studio with a bunch of good, contemporary rockers, lock the studio up, and tell him he can’t come out until he’s done made an album that rocks from beginning to end.
– Jon Landau

“I remember Elvis as a young man hanging around the Sun Studios. Even then, I knew this kid had a tremendous talent. He was a dynamic young boy. His phraseology, his way of looking at a song, was as unique as Sinatra‘s. I was a tremendous fan, and had Elvis lived, there would have been no end to his inventiveness.”
– B.B. King

I love Jimi Hendrix obviously, and Jimmy Page and Prince. And also Elvis Presley is a really great guitar player. I don’t think he ever took lessons; he was piecing it together himself. But he has great rhythm. And rhythm, to me, you can use it to your advantage if you’re not all over the fretboard.
– Brittany Howard

“Elvis, to me, is a symbol of tremendous promise and that kind of American hopefulness, where you can come from nowhere and have nothing and build yourself up and chase that American dream.”
– Patti Scialfa

The fact is Jerry Weintraub, the handsome, bearish movie producer, the man with the long career, who worked with Arthur Godfrey and Elvis Presley and Frank Sinatra and George Clooney, is a great storyteller – he’s this as much as he’s anything else. He takes time telling stories, too.
– Rich Cohen

Elvis is the greatest cultural force in the twentieth century. He introduced the beat to everything, music, language, clothes, it’s a whole new social revolution… the 60’s comes from it.
– Leonard Bernstein

To me, John Lennon and Elvis Presley were punks, because they made music that evoked those emotions in people.
– Joey Ramone

There have been many accolades uttered about Elvis‘ talent and performances through the years, all of which I agree with wholeheartedly. I shall miss him dearly as a friend. He was a warm, considerate and generous man.
–Frank Sinatra

If life was fair, Elvis would be alive and all the impersonators would be dead.
– Johnny Carson

As the lad himself might say, cut my legs off and call me Shorty! Elvis Presley can act. Acting is his assignment in this shrewdly upholstered showcase, and he does it.
– Howard Thompson

People don’t realize what they had till it’s gone. Like President Kennedy, there was no one like him, the Beatles, and my man Elvis Presley. I was the Elvis of boxing.
– Muhammad Ali