Pink Floyd Wish You Were Here: Everything You Need to Know - Classic Rock Music News
Skip to content 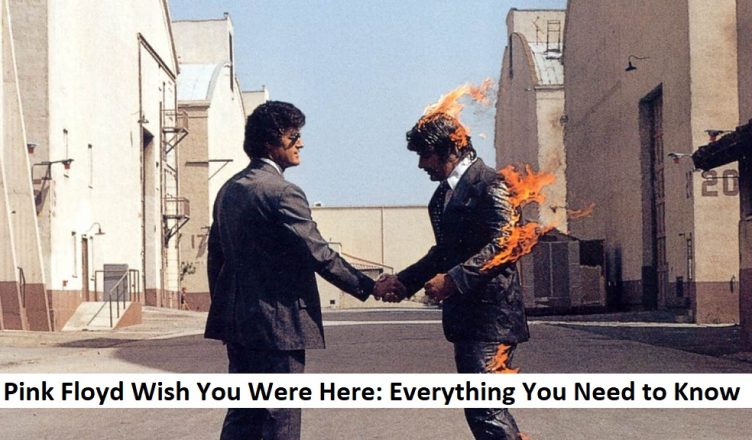 Pink Floyd Wish You Were Here,

So, so you think you can tell
Heaven from hell
Blue skies from pain
Can you tell a green field
From a cold steel rail?
A smile from a veil?
Do you think you can tell?
Did they get you to trade
Your heroes for ghosts?
Hot ashes for trees?
Hot air for a cool breeze?
Cold comfort for change?
Did you exchange
A walk on part in the war
For a lead role in a cage?
How I wish, how I wish you were here
We’re just two lost souls
Swimming in a fish bowl
Year after year
Running over the same old ground
And how we found
The same old fears
Wish you were here

1. Intimidated by the massive success of Dark Side of the Moon, Pink Floyd originally considered making an album called Household Objects, using rubber bands, wine glasses and cake mixers as instruments. Now while that sounds like it would have been a bigger “Fuck You” to the music industry than even Lou Reed’s Metal Machine Music, what I’ve heard sounds pretty cool.

2. Instead the suddenly rich and always miserable Roger Waters said “Fuck You” to the music industry with lyrics like the ones Roy Harper sings in “Have A Cigar” :

“The band is just fantastic, that is really what I think
Oh by the way, which one’s Pink?
And did we tell you the name of the game, boy?
We call it Riding the Gravy Train.
3. A great bit of the album is dedicated to the old Pink Floyd leader Syd Barrett, who through drug abuse and/or mental illness had become one of rock’s tragic figures. He is the “Crazy Diamond” addressed in the two epic tracks that begin and end the album :
You were caught in the crossfire of childhood and stardom,
blown on the steel breeze.
Come on you target for faraway laughter, come on you stranger,
you legend, you martyr, and shine!

An unrecognizable Barrett, fat, bald, shorn of eyebrows, visited the studio during the session. Listening to “Shine On You Crazy Diamond”, he apparently never realized he was the subject of the song.

4. The burning man on the Hipgnosis designed album cover was stunt man Ronnie Rondell ( “Spartacus”, “Thelma and Louise”). It took photo retouching specialist Richard Manning quite a bit of work in 1975 to “photo shop” his casual appearance:

He was covered in petrol that glistened dramatically in the blazing sun. I had to remove all the evidence of the petrol. By using Photo dyes, a mixture of dark grey with touches of magenta and cyan applied delicately to the shiny areas, I was able to gradually build up to match the darkness of the unaffected suit.
He was wearing a flame proof wig and neck protector which I had to remove. First, with a weak solution of bleach, lighten the dark areas on the side of his neck then blend the bleached area with photo dye to match the neck tone. The tarmac round the drain in the foreground needed some tidying up and then some general spotting overall. The scorch mark on the right hand side was a separate Dye Transfer. The background to this print was bleached to white and then put together at the printing stage.

5. Considered a classic album today, with sales over 13 million, Wish You Were Here was originally met with mixed reviews including one nasty appraisal from Rolling Stone’s Ben Edmonds:

“Shine on You Crazy Diamond” is initially credible because it purports to confront the subject of Syd Barrett, the long and probably forever lost guiding light of the original Floyd. But the potential of the idea goes unrealized; they give such a matter-of-fact reading of the goddamn thing that they might as well be singing about Roger Water’s brother-in-law getting a parking ticket. This lackadaisical demeanor forces, among other things, a reevaluation of their relationship to all the space cadet orchestras they unconsciously sired. The one thing those bands have going for them, in their cacophonously inept way, is a sincere passion for their “art.” And passion is everything of which Pink Floyd is devoid.

Behind the Song: Pink Floyd’s “Wish You Were Here”

When Pink Floyd entered Abbey Road Studios during the first week of 1975 to begin work on their ninth album, the guys were exhausted. Their previous release, The Dark Side Of The Moon, had become one of the decade’s biggest hits, transforming the cult musicians into mainstream art rockers. Pink Floyd cemented their new audience by touring heavily for three years, but the time had come to do something new. Recording a follow-up to Dark Side wasn’t going to be easy, especially with that album still clinging to the upper reaches of the Billboard charts, its success hanging over the band like a cloud.

Meanwhile, former Pink Floyd frontman Syd Barrett was suffering a mental breakdown. His crippling addiction to LSD had forced him out of the band in 1968, and a pair of solo albums had done little to resurrect his career in the intervening years. Peter Jenner, Pink Floyd’s original manager, even convinced Barrett to book some studio time at Abbey Road in August 1974, but the sessions petered out after three fruitless days. Barrett seemed to have lost his spark for good.

Five months later, Barrett’s old bandmates could still feel his presence at Abbey Road. Or maybe it was his absence – the absence from Pink Floyd, from reality, from himself – that resonated throughout those halls, echoing off the stucco walls like the sinister guitar riff from “Lucifer Sam.” It had a profound effect on Roger Waters and David Gilmour, who wound up dedicating much of the resulting album, including the title track, to their AWOL friend.

Wish You Were Here, like the record that precedes it, is a concept album. Revolving around the central theme of absence, Waters’ lyrics illustrate the difference between the group’s early years – when Pink Floyd was a band of brothers, making music for a small but devoted audience – and the present. The guys had become multi-millionaires in the wake of Dark Side’s success, but they’d also become cash cows for a corporate label, and the camaraderie that once existed between them had grown strained. Tying the song cycle together are two compositions about Syd Barrett: the nine-part opus “Shine On You Crazy Diamond,” and the short, haunting title track.

“Wish You Were Here” opens up with a distant chord progression from Gilmour’s 12-string acoustic guitar, processed to sound as though it’s emanating from a car stereo. The sound crackles and pops, and when a second guitar swoops into the mix, the disparity between both parts is thrown into sharp relief. The second guitar is loud and blemish-free; the first is just a ghost, a pale shadow of what it must’ve sounded like when it was originally recorded.

By 1975, Syd Barrett had become a pale shadow of his former self, too. When he made a surprise visit to Abbey Road on June 5, stumbling into the studio while engineer Brian Humphries tweaked the final mix of “Shine On You Crazy Diamond,” he’d put on so much weight that the others didn’t recognize him for several minutes. He’d shaved his head, too, along with his eyebrows. It pained Waters to see his friend so lost, so detached, so disengaged from the world around him. “Wish You Were Here” deals with that mental inability – the refusal, even – to engage with reality, and it served as much as a rallying for Waters as a sad tribute to Barrett’s better days.

“All [my] songs are encouraging me; I guess I write them for me,” Waters explains during a new documentary, Pink Floyd: The Story Of Wish You Were Here. “It’s to encourage myself not to accept a lead role in a cage, but to go on demanding of myself that I keep auditioning for the walk-on part in the war, ‘cause that’s where I want to be. I wanna be in the trenches. I don’t want to be at headquarters; I don’t wanna be sitting in a hotel somewhere. I wanna be engaged.”

The recording sessions for Wish You Were Here were difficult, and Pink Floyd’s four members rarely showed up to the studio at the same time. Things felt disconnected. As a result, the title track became a summary of the entire recording process, a musical link between Barrett’s mental decline and Pink Floyd’s crumbling work ethic. It also paid a clever reference to 1968’s “Jugband Blues,” Barrett’s final contribution to the Pink Floyd catalog, which opens with the following triplet: “It’s awfully considerate of you to think of me here / And I’m much obliged to you for making it clear / That I’m not here.”

For David Gilmour, who sang “Wish You Were Here” in a wounded baritone, Waters’ lyrics struck close to home.

“Although ‘Shine On You Crazy Diamond’ is specifically about Syd,” he says in the same documentary, “and ‘Wish You Were Here’ has a broader remit, I can’t sing it without thinking about Syd.”

Waters left the group ten years later, once a longstanding power struggle with Gilmour reached its boiling point. A nasty court case followed, with Waters seeking to permanently disband the group and Gilmour looking to retain the rights to Pink Floyd’s name. Gilmour won, but Pink Floyd never really felt like Pink Floyd again … at least not until July 2005, when Waters rejoined his old bandmates for a reunion performance at London’s Live 8 festival.

“It’s actually highly emotional, standing up here with these guys after all these years,” Waters said halfway during the band’s four-song set. “We’re doing this for everyone who’s not here … and particularly, of course, for Syd.”

And with that, the band segued into “Wish You Were Here,” the song they’d completed exactly 30 years prior.