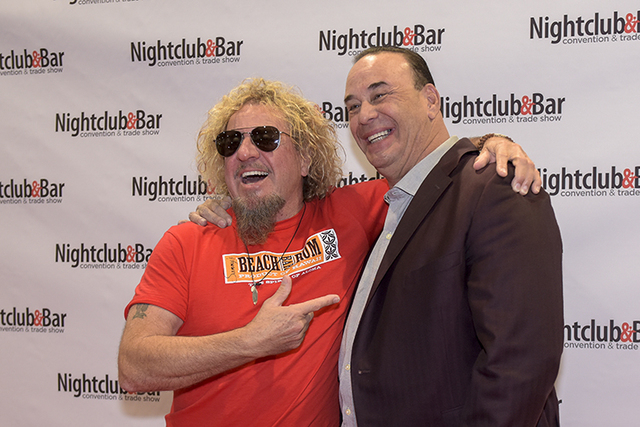 “I’m trying to tread lightly on the whole thing,” Hagar told me. “Every time they do something, I’m like, ‘Oh my god, can these guys do anything worse to their reputation and to the level of the music of the band?”

I can’t believe Van Halen even released the album with Roth’s voice sounding like it does.

“They’ve got some pretty rough vocals,” Hagar said of Roth.

I told Hagar I tried not to even bring up Van Halen.

This Friday at Fremont Street Experience, a tribute band will perform some Hagar hits. Then around 9 p.m., the Circle will walk on stage with Sammy’s Beach Bar’s Rum, toast the crowd and watch an overhead-canopy show of Circle songs.

After that show, Hagar will party at his Cabo Wabo Cantina in Planet Hollywood.

Then on Saturday, the Circle performs at the Downtown Las Vegas Events Center.

The Circle has its own live album, “At Your Service,” coming out May 19. I’ve heard one song. That one song sounds infinitely better than the new Van Halen album.

On stage, the Circle performs Van Hagar songs, Hagar solo hits, songs from his days in the band Montrose, and Led Zeppelin classics, since Bonham is the son of Zeppelin’s iconic drummer.

Hagar said Bonham, revered in his own right, is at the top of his game.

“In the old days, he was great, but he was crazy. We’d say, ‘Where’s Jason?’ It was like, ‘He just got up and walked off stage and went back to the dressing room to get himself a drink.’ He was living that real ’70s Led Zeppelin style.”

Hagar said seeing the Circle is the only way to hear Van Halen musicians play the Van Hagar oeuvre.

Hagar also has a new TV show starting on AXS, called “Rock and Roll Road Trip.” He’s interviewing famous friends like Tommy Lee and Alice Cooper on that show. And he is launching a radio show this year.

As you can see, Hagar remains one of the world’s most reliable quote machines.

“The truth of the matter is, everyone is welcome, and has the right, to their own opinion. That would include me.”