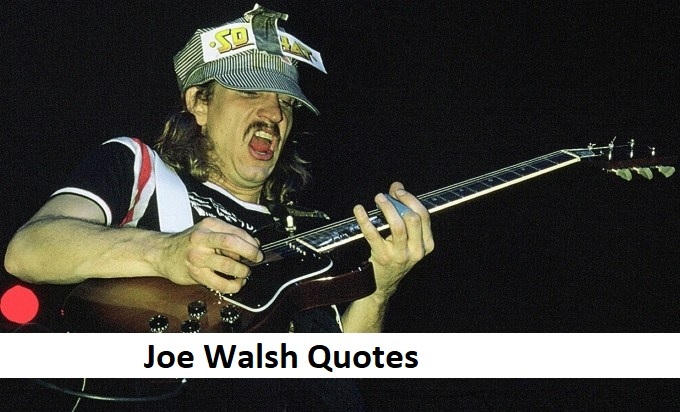 The new generation of musicians is writing music on computers, and this is very sad because the quality of songwriting has crashed and dived. There are some songs out that are made by only one guy who works a computer and doesn’t play any instruments.

I would say ‘struggling’ is a good word. We were all struggling to keep doing what we were doing, and more things were expected of us. I mean, one of the big things was how in the world are we going to top ‘Hotel California?’

Digital technology has eaten classic radio as we know it. Independent stations with disc jockeys who chose their own music have all gone; it’s these huge parent companies that own a hundred stations and then decide what we should hear.

I had seen my buddies crash and burn. Keith Moon died, and I always thought that was the way he wanted to go. John Belushi was a dear friend. A lot of the guys that I ran with were ending up dead, and I saw myself right on schedule to do that. I had some moments of clarity – once in a while.

I enjoy my solo career because I get to play smaller places like clubs and theaters, and the interaction with the audience is much higher quality. It also sounds better than a baseball stadium. Everybody has a good seat, and I don’t have to play a specific part like I do in the Eagles.

You know, there’s a philosopher who says, “As you live your life, it appears to be anarchy and chaos, and random events, non-related events, smashing into each other and causing this situation or that situation, and then, this happens, and it’s overwhelming, and it just looks like what in the world is going on ? And later, when you look back at it, it looks like a finely crafted novel. But at the time, it don’t.

You can fix things with digital technology and there’s a temptation to fix everything or make it perfect and what you’re losing there is the human performance that may not be perfect but there may be magic in it. You can make it perfect but music doesn’t sound good perfect for some reason.

The best part of success is that it got me past the basic survival level of existence so that I was comfortable. I didn’t have to worry about stuff pertaining to survival. Once that was taken care of, I got the chance sit down and create and work at what I do.

‘Hell Freezes Over’ happened, and the Eagles decided to get back to work. We’ve toured pretty much since then, and I’ve been around the world a couple times. I had never really gotten any momentum going in a solo project during that period of time – Eagles was pretty much a full time job.

(The mainstream media) are so vested in our first black president not being a failure that it’s going to be amazing to watch the lengths they go to to protect him. They, I believe, will spout this racist line if some of their colleagues up here aren’t doing it aggressively enough. There is going to be a real desperation.

Ricky Washington is from a Baptist church in Miami, Florida, and he can pretty much sing anything. We just started working it up at soundcheck, and holy smokes, it’s just great! The audience gets to singing. So there’s that stuff to do – find some old obscure R&B stuff – because we can do it justice.