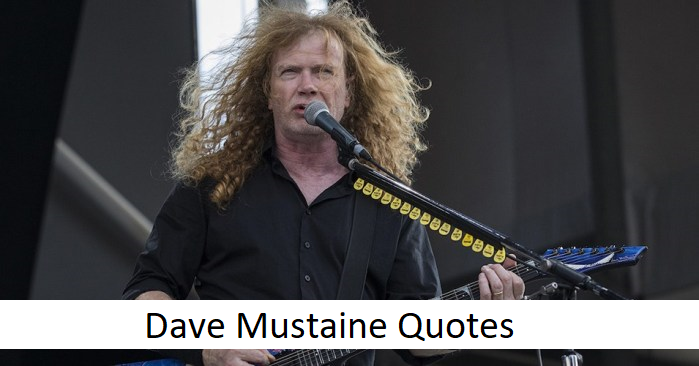 Well, the stuff that I liked growing up was AC/DC, Led Zeppelin, but I also liked the Beatles and guys like Cat Stevens and Elton John.

“I let that swim around in my aching head for a few minutes – “the arsenal of megadeath…the arsenal of megadeath” – and then, for some reason I can’t quite explain, I began to write. Using a borrowed pencil and a cupcake wrapper, I wrote the first lyrics of my post-Metallica life. This song was called “Megadeth” (I dropped the second “a”), and though it would never find its way onto an album, it did serve as the basis for the song “Set the World Afire.” It hadn’t occured to me then that Megadeth-as used by Senator Cranston, megadeath referred to the loss of one million lives as a result of nuclear holocaust-might be a perfectly awesome name for a thrash metal band.”

Buckethead [former GUNS N’ ROSES guitarist] is probably twice as good a guitar player as me and Slash combined, and can stand having fried chicken rubbed up against his face all night for a couple of hours.

“Finally, I found what seemed at the time to be a lid of some sort. Presuming it was a toilet seat (but not really caring one way or the other) I lifted it up, then dropped my shorts and began to piss. Ahhh…success. Then I stumbled back to bed and passed out. It wasn’t until the next morning that I realized what had actually happened. I woke to the sight of Junior standing over my bed with a look of disgust on his face. “Hey, man. Did you pee in my suitcase?”

“Some years later, long after he and Megadeth parted company, Jay Jones was stabbed to death with a butter knife during-rumor has it-a fight over a bolonga sandwich. That’s not funny, of course. But, if you knew Jay, neither is it particularly suprising.”

“It’s pretty simple for me, really. I want to be able to carry a gun; listen to whatever music I like; eat, drink and be merry; and not hurt anyone else (the exception, obviously, being self-defense). It’s the abbreviated Sermon on the Mount: treat other people the way you want to be treated.” Dave Mustaine Quotes

“I am not a registered member of either of the two main political parties, and I suspect that will never change. I think of myself as nonpartisan: I am generally distrustful of professional politicians, so when I enter the voting booth I tend to go with whomever I perceive as the lesser of two evils.”

“My mom and my aunts and all the other Witnesses would warn me that I was destined to burn in hell if I didn’t clean up my act, but frankly I didn’t care. I just wanted to get away from them.”

The Bible and several other self help or enlightenment books cite the Seven Deadly Sins. They are: pride, greed, lust, envy, wrath, sloth, and gluttony. That pretty much covers everything that we do, that is sinful… or fun for that matter.

Yesterday evening I received a call that a person had located a body and the investigators from SDSD Homicide Division described our beloved mother, Sally Estabrook. Thank you all for your prayers, your good thoughts, and positive vibes. Dave Mustaine Quotes

I was always the new kid in school, I’m the kid from a broken family, I’m the kid who had no dad showing up at the father-son stuff, I’m the kid that was using food stamps at the grocery store.

To me, the most important thing was to treat people the way you want to be treated. Some people say that I’m a mean person. Well, you know what? The person that’s saying that is probably a dipshit and I put them in their place! I have a knack for doing that.

Playing live is basically just hyperactivity and a certain sense of enchantment that I deliver to the audience, to let them know what it would be like to be inside my head.

I like jazz, but I could never play it. You just sit there with a guitar the size of a Chevy on your chest, wearing a stupid hat, playing the same solo for an hour.