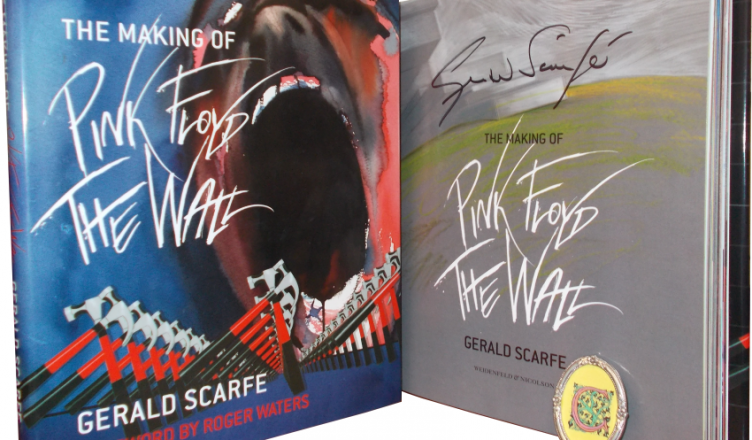 One of the most fascinating rock bands ever, Pink Floyd was formed in 1965. After a year in the London ‘underground’ experimenting with revolutionary techniques like lights which matched their music, they released their first single in 1966. Their breakthrough album, THE DARK SIDE OF THE MOON, was released in 1973 and stayed in the charts until 1982, the longest a record has ever been continuously in the charts, becoming one of the best-selling albums of all time. In 1975 they released WISH YOU WERE HERE which reached iconic status, then in 1979 THE WALL went to number 1 in almost every country in the world. The movie version of THE WALL starring Bob Geldof was released in 1982, becoming a cult favorite. In the 1980s a rift developed between the band members which culminated in law suits. Only recently have there been reconciliations which have allowed founder member Nick Mason to write his personal take on the band’s history.

2. A Saucerful of Secrets: The Pink Floyd Odyssey

Saucerful of Secrets is the first in-depth biography of this very private group. At the heart of the saga is Syd Barrett, the group’s brilliant founder, whose public decline into shattered incoherence–attributable in part to his marathon use of LSD–is one of the tragedies of rock history. The making of Dark Side of the Moon and Floyd’s other great albums is recounted in detail, as are the mounting of “The Wall”  and the creation of the flying pigs, crashing  planes, “Mr. Screen” and the other elements of their spectacular stage shows. The book also explores the many battles between bass player/song writer Roger Waters and the rest of the group, leading up to Water’s acrimonious departure for a solo  career in 1984 and his unsuccessful attempt to disolve the group he had left behind.

Saucerful of Secrets is an electrifying account of this ground-breaking, mind-bending group, covering every period of their career from  earliest days to latest recordings. It is full of  revealing information that will be treasured by all who love Pink Floyd‘s music.

3. Comfortably Numb: The Inside Story of Pink Floyd

Mark Blake draws on his own interviews with band members as well as the group’s friends, road crew, musical contemporaries, former housemates, and university colleagues to produce a riveting history of one of the biggest rock bands of all time. We follow Pink Floyd from the early psychedelic nights at UFO, to the stadium-rock and concept-album zenith of the seventies, to the acrimonious schisms of the late ’80s and ’90s. Along the way there are fascinating new revelations about Syd Barrett’s chaotic life at the time of Piper at the Gates of Dawn, the band’s painstaking and Byzantine recording sessions at Abbey Road, and the fractious negotiations to bring about their fragile, tantalizing reunion in Hyde Park. Meticulous, exacting, and ambitious as any Pink Floyd album, Comfortably Numb is the definitive account of this most adventurous–and most English–rock band.

4. Pink Floyd and Philosophy: Careful with that Axiom, Eugene!

Pink Floyd’s sound and light shows in the 1960s defined psychedelia, but their later recordings combined rock, orchestral music, literature, and philosophy. Dark Side of the Moon and The Wall ignored pop music’s usual strictures to focus on themes of madness, despair, brutality, and alienation. Here, 16 scholars set delve into the heart of Pink Floyd by examining ideas, concepts, and problems usually encountered not in a rock band’s lyrics but in the pages of Heidegger, Foucault, and Sartre. These include the meaning of existence, the individual’s place in society, the contradictions of art and commerce, and the blurry line between genius and madness. The band’s dynamic history allows the writers to explore controversies about intellectual property, the nature of authorship, and whether wholes, especially in the case of rock bands, are more than the sum of their parts.

5. Crazy Diamond: Syd Barrett and the Dawn of Pink Floyd

Syd Barrett was Pink Floyd’s founder, singer, guitarist and principal composer, who left the group in 1968 amidst tales of acid-induced madness. Barrett’s brief flash of erratic brilliance has is now the stuff of rock legend, and his post-Floyd recordings have become cult classics.

6. The Making of Pink Floyd: The Wall

Pink Floyd’s The Wall is one of the most iconic and imaginative albums in the history of rock music, spawning one of the most ambitious stage show productions ever conceived, and a film that instantly became a cult classic. All three were created in close collaboration with renowned cartoonist and illustrator Gerald Scarfe. Here, for the first time, Scarfe shares his experiences with the band and reveals the inside story behind The Wall‘s development in the studio, on the stage, in front of the camera, and for the 2010 tour.

Beautifully illustrated, The Making of Pink Floyd: The Wall contains hundreds of unseen photos as well as exclusive interviews with Roger Waters, David Gilmour, Nick Mason, and more. The result is a book Waters calls “brilliant” and “absolutely amazing.”