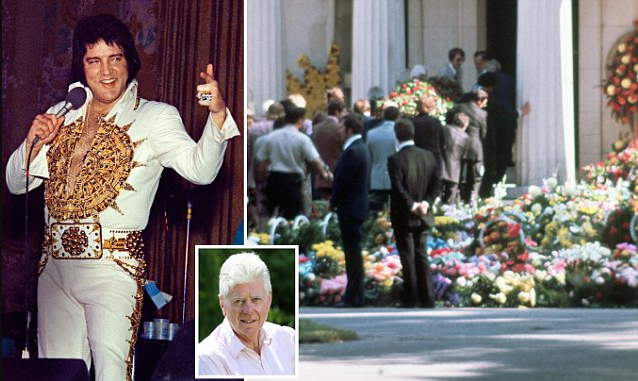 Forty one years ago this week, as the BBC’s correspondent in Washington DC, I was filming an interview with a lawyer about political corruption when his secretary burst in.

‘Oh my Gaaad,’ she cried, putting her hands to her face. ‘Elvis Presley’s dead!’

Without a word, my cameraman, Bob Grevemberg, and I packed up and headed to Washington’s National Airport. When we landed in Memphis, Tennessee, it was late.

Elvis Presley’s personal airliner, with a huge treble clef painted on its tail, was parked at the airport.

We drove into Memphis, past the fairground Elvis would often hire for an afternoon so he could take his nine-year-old daughter Lisa Marie on the rides without being pestered by fans.

But strangely, no one in Memphis seemed to be talking about ‘The King’ who had just died in their midst, no one on the streets or gathering on corners.

Early next morning, Bob and I were outside Graceland, Elvis Presley’s mansion. There was no one there either. Stranger still.

Next to the steel gates — also decorated with treble clefs and musical notes — there was a guard house, so I presented my BBC credentials to the gentlemen inside and asked to speak to a member of the Presley family.

As we waited, a few people strolled up. It dawned on me that Elvis was a bigger star in Britain than America. We love nostalgia. The Americans always want what’s new.

Two hours later, around 70 people had gathered. I was suddenly aware of a very big man wearing a big hat next to me.