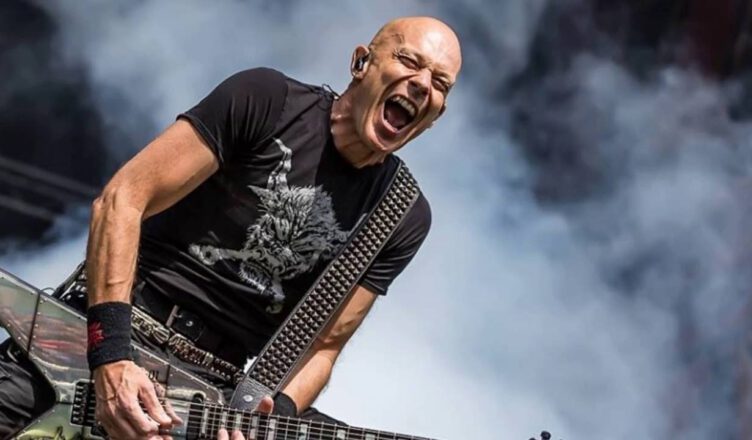 Accept guitarist Wolf Hoffmann spoke to Metal Empire‘s RJ Bayley about the origin of the band’s unusual name. He said (listen to the audio below): “It actually existed before I joined the band, believe it or not. The guys had already performed under that name locally a couple of times. It was basically a neighborhood band, and they had that name. I was never completely happy with it, but of course, it stuck and we kept it throughout the years. I think if it came out of an album, or I know it did, there was an album by a band [of blues] called Chicken Shack, believe it or not. And they had an album [in 1970] called ‘Accept.’ And I always thought, ‘How weird? How weird? Why would you name a metal band after an album? by Chicken[Shack]? ‘ But they did, and it was a done deal, and we kept it all these years. But it’s still a bit of a weird mystery, the whole thing. ”

When asked what the name Accept means to him personally, Wolf said: “Nothing, actually. It’s just a name. I never thought it was a metal name. I mean, fans tell me they love the name; they think which is great. But I always thought, OK, the meaning of this is not very metal, is it? … The name was already there when I joined the band, and we kept it for all these years. And after a time, you keep forgetting it, which it really means, because you’re so used to it. But I never thought it was a brilliant band name or anything. I thought other bands had much cooler names, like Black Sabbath for example, or Judas Priest, that. it’s all metal. On the other hand, there are some dumb band names, like Def Leppard, I never thought that would be very good … That’s weird. I’m sure there are examples going both ways, and we’re somewhere in between, I think. ”

Hoffmann is the only remaining original member of Accept, which he formed in 1976 in the city of Solingen, Germany, with singer Udo Dirkschneider and bassist Peter Baltes.

Accept new studio album “Too Mean To Die” will be released on January 15, 2021, via Nuclear Blast. The LP will be the group’s first without bassist Peter Baltes, who left Accept in November 2018. He has since been replaced by Martin Motnik. Accept lineup has also expanded with the addition of a third guitarist, Philip Shouse, who originally replaced Uwe Lulis during last year’s “Symphonic Terror” tour before he was asked to join the band permanently.

“Too Mean To Die” was recorded in Nashville, Tennessee with British producer Andy Sneap (Judas Priest, Megadeth), who has been responsible for Accept magnificent studio sound since 2010.

Accept latest release was “Symphonic Terror – Live At Wacken 2017”, with the band performing at the Wacken Open Air festival in Wacken, Germany.