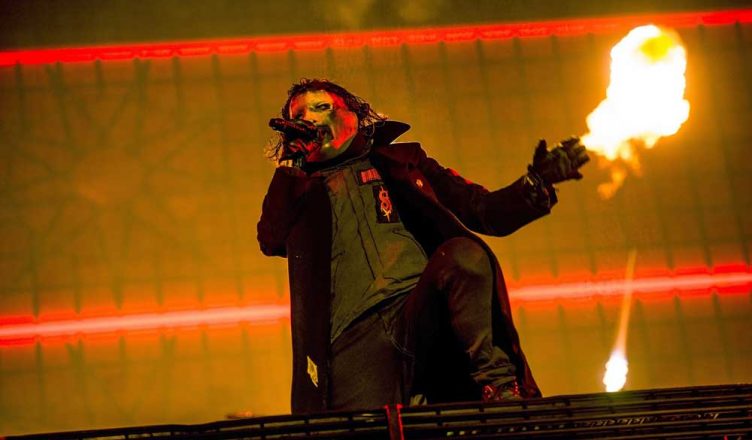 1. Legendary horror composer John Carpenter partly influenced We Are Not Your Kind

“I don’t know if there was an overt influence, but certainly not only his scoring, but his mood that he would create cinematically, absolutely. The music that he scored for his movies was so ominous and lurching, and you can definitely hear that on Spiders and things like My Pain. A lot of that goes to Clown, who was really the musical architect behind that.”

2. Being in Slipknot made Corey a better person

“Obviously it’s allowed me to share my pain with the world that, maybe at the time, didn’t allow me to share my pain – didn’t give me easy access to a way to let that out. It allowed me to tap into the inner angst and write it down and make sure that I could let it go, and show people how to do it themselves. So I think, in a way, being in Slipknot has just made me a better person – a better, well-rounded person, and someone who realises that, when I’m hurting, I should always try to find a way to either get help or solve the pain.”

3. He’s got plans to write more books… but not just yet

“I’m kind of toying with a couple. I kind of took a break from writing books after America 51, just because it took such a toll on me, mentally, that I really had to step away for a while. But I’m starting to get that itch again; I’ve actually got a really great idea for a novel, as well as a cool idea for another rant book as I like to call them! Probably in the next year or so I’ll start working on that, but right now my main focus is Slipknot.”

4. The most difficult song to put together on We Are Not Your Kind was Unsainted

“That song, in the demo stage, it had moments that were very similar, but at the same time, it was very different – especially the beginning. It was such a great song, and yet we couldn’t figure out how to start it; we couldn’t figure out what the best intro was for it. Once again, it was one of those things where letting go of my assumptions of what needs to happen came in handy when Clown and Greg Fidelman – our producer – came to us and said, ‘What about a choir?’”

5. …but he was initially resistant to the choir in the intro

“I immediately blanked against it. I was like, ‘No, no!’ I don’t want to say it was dumb, but it didn’t feel like us… until I heard the mock-up for it, and just the mock-up alone was incredible. And then having a real choir sing on it was… I mean, it was literally the last song we were able to say was finished, and it was because we were trying to find the absolute right way to make it perfect. And we nailed it. I was really stoked – I was never so happy to be wrong in my life, let’s put it that way!”

6. Quitting cigarettes and alcohol has made Corey’s voice stronger than ever before

“Every album is a challenge vocally, because I want to push myself to be better than the last one – especially considering some of the challenges that I’ve had physically over the years. I haven’t drank [alcohol] in nine years and haven’t smoked in five, and my voice is actually stronger than it’s ever been.”

7. Solway Firth was the hardest song to make, vocally

8. They will be playing Nero Forte live

“Absolutely – probably not soon enough for a lot of fans (laughs). But definitely once we knock the rust off of it, then we’ll definitely be able to get that out there.”

9. His favourite old song to perform live is Disasterpiece

“My favourite old song to play live is Disasterpiece [from 2001’s Iowa] – it always has been. That song just makes me mental in a way that none of the other songs really do. It gets me going, and I’m always just ready to go.”