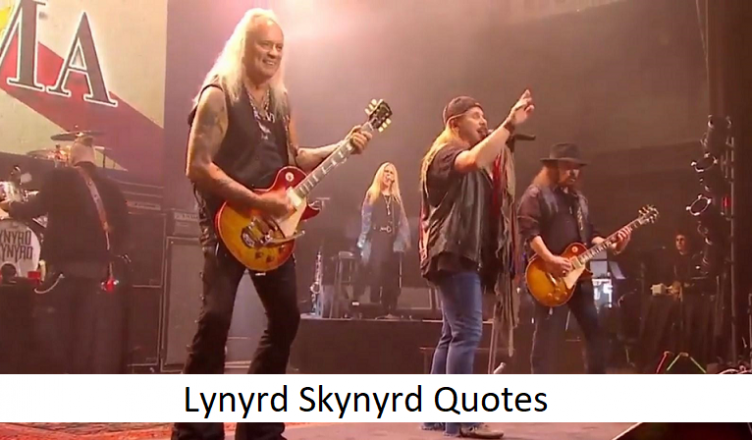 “And Lord I can’t make any changes. All I can do is write ’em in a song. Yes but I can see the concrete a slowly creeping. Lord take me and mine before that comes.”
― Lynyrd Skynyrd Quotes

I know about the sweet home. I went to school with ’em boys, what became Lynyrd Skynyrd; I knew Allen Collins, the skinny girl-beautiful guitarist. I put Allen Collins in every travel piece I do. Travel writing is harrowing, going to Bermuda with a banjo on my knee.

Everybody in Lynyrd Skynyrd loves different styles of music, and our minds are very open when it comes to writing our songs and making the band true to what the band is, but also stepping out and doing something current.

On our Web site, we have people complaining about us not playing new stuff. But there’s so many classic Lynyrd Skynyrd songs, you can’t go out and just do a bunch of new things.

We’re definitely a hodgepodge of influences. Mine, most heavily, would be Southern rock – the Allman Brothers, Lynyrd Skynyrd and stuff like that. Hillary is more from the country side – her mom is Linda Davis, a country singer. Dave, he’s a big fan of the Eagles and like that.

The Bowery was a place that would let us do original songs – not just covers – but we would have to work for tips, so we learned how to work an audience. In order to keep our jobs, we had to keep people happy, so that meant playing the latest Lynyrd Skynyrd and ZZ Top or Merle Haggard.

“Oh, take your time, don’t live too fast
Troubles will come and they will pass
You’ll find a woman and you’ll find love
And don’t forget, son, there is someone up above”
― Lynyrd Skynyrd Quotes