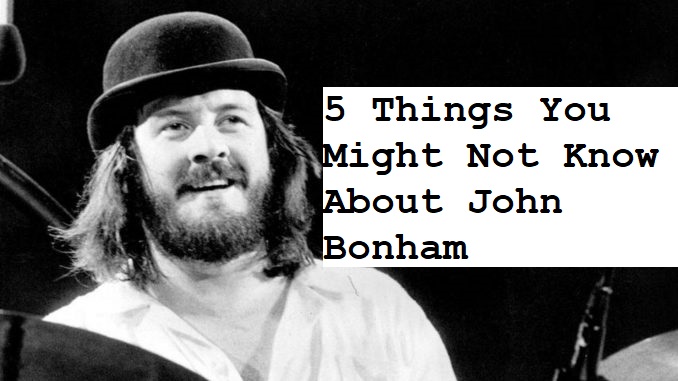 As the drummer for Led Zeppelin, it’s hard to imagine that there’s much of anything about John Bonham – who died on this date in 1980 – that’s left to tell that hasn’t already been told, but that doesn’t mean that we can’t at least try to dig up a few things that might cause your eyebrows to rise in surprise. Check out these five facts about Bonham and see if you’re not at least slightly startled by a few of them.

In 2016, the food-centric site Extra Crispy posted a piece with the headline “What John Bonham Ate for Breakfast,” but it wasn’t exactly breaking news: the article was quoting from Angela Bowie’s 1993 book Backstage Passes. That said, it was still a pretty funny story about how Bonham was so devoted to eating Walls’ pork sausages for breakfast while on the road that he took his own stock of sausages with him, leaving it to Led Zeppelin’s roadie to fix them. You can click right here to find out exactly how Angela and David Bowie play into this anecdote, but suffice it to say that the Bowies were lifesavers.

2) He played on a version of Wings’ “Beware My Love” that remained unreleased until 2014.

Often described as the only proper rock song on Wings’ 1976 album WINGS AT THE SPEED OF SOUND, “Beware My Love” was even more rockin’ at one point. Bonham participated in a first-take demo of the song, one which only received official release when McCartney culled together some rarities for the bonus disc of the album’s expanded reissue in 2014.

3) He and Keith Moon both provided percussion for Led Zeppelin during the band’s Los Angeles show on July 23, 1977.

Don’t get too excited: as UltimateClassicRock.com wrote of the moment, “As with much of what Moon did during his too-brief career, the whole thing seemed very informal, and [Moon] didn’t have his own kit; instead, he added bongos and tambourine before briefly sitting at Bonham’s drums.” Still, just the thought of those two guys sharing a stage, even for a few moments, is kind of mind-blowing.

4) He once played drums during a gig by The Damned.

Unfortunately, there’s no footage of this, but in a 2017 Rolling Stone interview with The Damned, frontman Dave Vanian recalled an occasion when Led Zeppelin turned up at one of the band’s shows. “John Bonham wanted to come up onstage and play drums,” recalled Vanian. “All the punks were throwing things at him, and he was very, very pissed. Unfortunately, he didn’t manage to play very well and made a bit of a mess of things. But I was quite amazed at people’s reactions.”

5) Speaking of Sir Paul, Bonham’s performance with McCartney’s “Rockestra” for the Concert for Kampuchea was seemingly his last live performance in the UK.

When Led Zeppelin performed their set at the Knebworth Festival on August 11, 1979, no one imagined it would prove to be the last-ever live performance by Robert Plant, Jimmy Page, John Paul Jones, and John Bonham in the UK. As such, when Bonham turned up to participate as a member of Paul McCartney’s all-star “Rockestra” at the charity concert for the people of Kampuchea, it turned out to be his last live performance in the UK prior to his death in 1980.