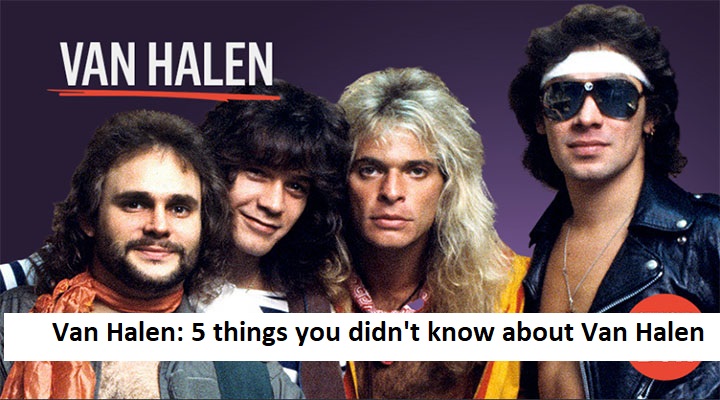 Van Halen is a unique band. They started out as a down and dirty rock band with David Lee Roth at the lead before switching lead singers and becoming a more successful, more mature rock band with Sammy Hagar. Along the way, their fan base remained loyal and they became rock and roll legends. Here are five things you might not know about Van Halen.

Van Halen was a struggling club band before Gene Simmons discovered them. Simmons actually heard the band at a club and started trying to get his record label to sign the band. His label refused, claiming that Van Halen would never be successful. Simmons helped them with a demo and it wasn’t long before Van Halen was signed by another label and made it big.

Eddie Van Halen is considered one of rock music’s greatest guitarists. However, he was not always the guitarist in the family, as Eddie played drums and his brother Alex played guitar. The two decided that Alex was better on the drums than Eddie, and while Eddie didn’t care about playing guitar, they switched anyway. Things seemed to work out well after they made the switch.

Van Halen had a series of number one albums once they switched lead singer and brought in Sammy Hagar. While the change to Hagar made them more successful, nothing they ever did matched the sales of 1984, their final album with David Lee Roth. It was their only album to hit diamond status and sold over 10 million copies in the United States alone.

There was a point after Sammy Hagar was fired form the band where they decided to just bring in another new singer. Their choice was Gary Cherone from Extreme. Unlike Hagar, who came in following a huge solo career, Cherone was the singer of a hair band years after hair metal died out. After one album, the record label said they wouldn’t support Van Halen without either Roth or Hagar singing and Cherone was let go.

Michael Anthony quit Van Halen to follow Sammy Hagar and the band seemed to hold it more against Anthony than Hagar. As a matter of fact, when they re-released some re-mastered versions of early albums, they airbrushed Anthony out of photos. Replacing Anthony as bassist was Eddie’s own son, Wolfgang Van Halen. Wolfgang was born in 1991, seven years after Roth left the band the first time.