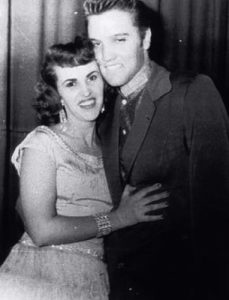 In 1955, Wanda Jackson was a 17 year old aspiring country singer, with some minor hits to her credit and a half-hour radio show on KLPR in Okla City. In July, she was booked on a packaged touring country music show. It was here that she met a young male singer from Memphis who had a new sound and a controversial stage presentation. His name was Elvis Presley; they became fast friends. They performed in other touring shows in August and October, 1955, and again in early 1956. Wanda Jackson is the first lady of Rockabilly . “The beautiful girl with the bad voice’ appeared on the same bill as Elvis on the Hank Snow Jamboree in July and August 1955, and a two week tour that went to Abilene, Texas, to St. Louis (Missouri), in October 1955, then in 1956. Wanda Jackson: In July ’55, I’d just graduated from high school. I already had a couple of hit songs in the country music field, and Bob Neal, the talent agent who also managed Elvis before Colonel Parker, said, ‘I’m booking a young man named Elvis Presley who is getting popular real fast, and we could use a girl on the show’. I had no idea who he was